When the going gets tough and the federal government is about to shut down, the geologically sharp-eyed tough decide they have had enough!  Where do these tough go?  They go to a national park!

This is probably not the most enlightened choice I have ever made (and I’ve made some doozies), particularly during these times of fiscal stress and congressional chaos.  I have no idea whether the park will remain open for the duration of my intended week’s stay.  Nevertheless, I have been wanting to go to Point Reyes National Seashore for years, and the opportunity has finally presented itself.  Basically, I said to myself “Self!  Time is a-wasting and you are not getting any younger.  Just do it!”

So… weather and road conditions permitting (the recent storm having passed on to some other unsuspecting area, I can locate the appropriate highway out of my snow-swathed neighborhood, the mountain passes in Nevada and the Sierras are clear enough to plow through with my trusty Subaru) I will take off from home this Monday 2/28, drive approximately 440 miles to Reno NV (“The Biggest Little City in the World!”) and stay my first night on the road at one of their fine gambling establishments (you cannot beat a room in a high-rise casino for $22/night!  As my mother used to say – “We’re just going to sleep there, we’re not going to buy the place.”).

I have road maps galore (Thanks, AAA!) but sadly no geological maps of Nevada or California.  If I had been really organized and thought that far ahead I might have been able to purchase online from the Nevada Bureau of Mines and Geology or I could have perused the California Geological Survey website for something suitably enthralling.

Not to worry!  The Park website has oodles of information about the San Andreas Fault which runs right near (practically through) the Bear Valley Visitor Center and up the coast through Point Reyes.  I also found a nifty field guide on the internet (which I will cite at a later date) which describes the Franciscan Complex at Shell Beach.

In addition to all this geology, the gray whales are in the midst of their 10,000-mile round-trip migration past the Point which extends 10 miles out into the Pacific Ocean and affords some of the best whale-watching spots on the coast.  You can be sure I’ll be checking out some ranger-led programs while I am there!

Earlier this week, in preparation for my talk on Katmai National Park and the 1912 eruption of Novarupta (see previous post), I was researching the internet, looking for information on the state of seismographs during those early years of the 20th century.  It was during all this Binging and Googling that I came upon an obituary in the New York Times.
I don’t remember learning much about Jack Oliver when I was in school – not like I remember learning about so many other giants of the geologic realm – William Smith, James Hutton, Charles Lyell, Alfred Wegener, J. Tuzo Wilson.  Jack Oliver was one of the pioneers in the study of plate tectonics.  In the 1960’s,  his studies of seismic activity and the records of earthquakes in the South Pacific ultimately led him and two of his graduate students to conclude that part of the ocean floor was being shoved downward.  According to his biography on Wikipedia, “The research by Oliver’s team led them to conclude that the collision of tectonic plates was forcing material deep into the earth where they met below the Pacific Ocean, and provided strong evidence of the existence of continental drift, a theory that had been largely scoffed at by the scientific community when it was first proposed by Alfred Wegener in 1912.”
I am proud and not a little overwhelmed to be standing on the shoulders of such a giant as Jack Oliver.  Click here for the abstract of his 1968 article “Seismology and the New Global Tectonics.”
If you happen to be in Cedar City, Utah this Wednesday 2/16/11, you are invited to a meeting of the Southern Utah University Geology Club.  I’ll be talking about my summer (2010) spent as a park ranger at Katmai National Park in southwest Alaska.   The potluck dinner starts at 6:30 PM in room 016 and the program will begin at 7:00 PM.
There will be BEARS ~~~ 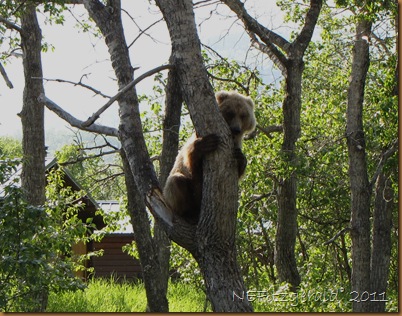 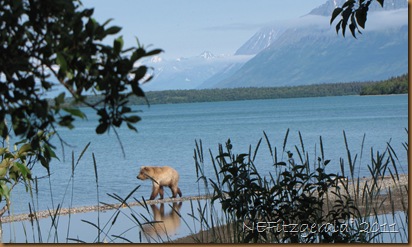 There will be SALMON ~~~ 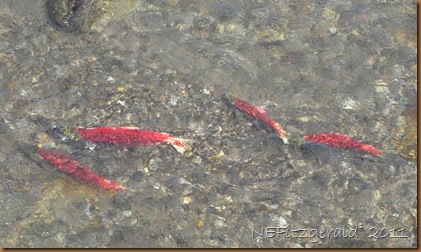 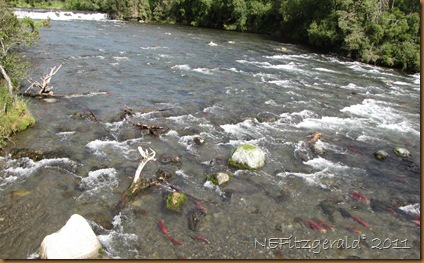 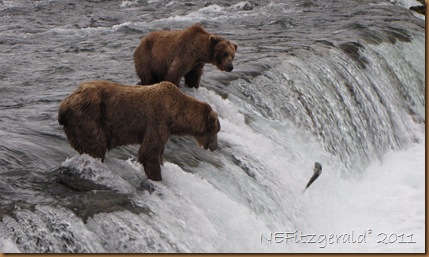 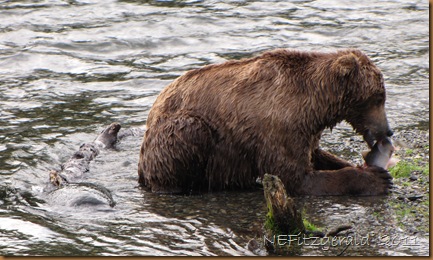 And of course there will be NOVARUPTA … 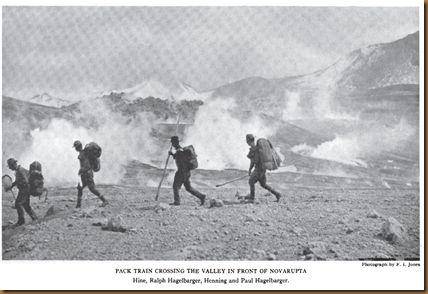 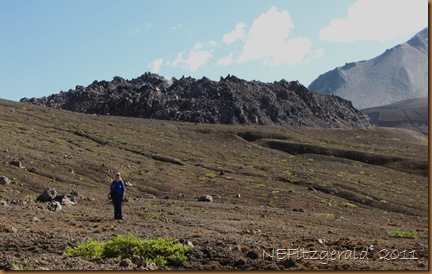 & HE VALLEY OF TEN THOUSAND SMOKES ~~~ 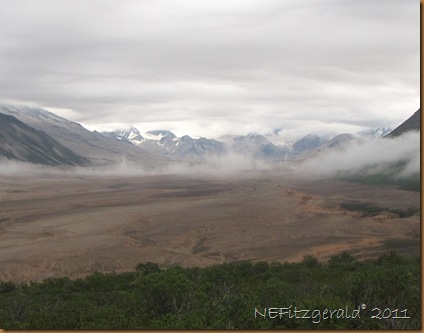 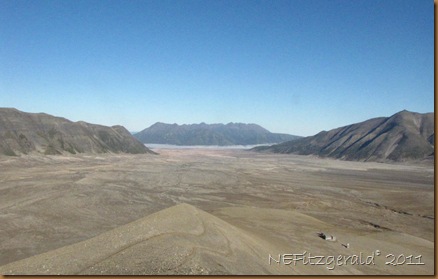 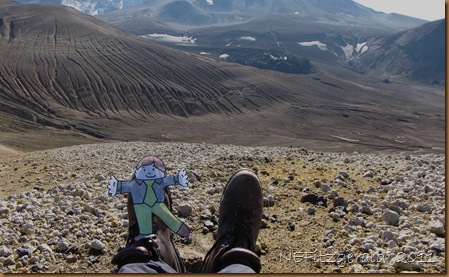 For this third post in the WATCH FOR ROCKS mini-series on copper mineralization and skarn, I pose a thought-provoking fifth and final question:

Is there anyone left in the building?

No, wait. That was the fourth-and-a-half question. Here is the final fifth:
What are the relationships between copper (Cu) and other minerals such as chalcopyrite, cuprite, chrysocolla, bornite, malachite, and azurite, magnetite, and hematite, among others?

First, a word or two (I swear I am not making these up!) about hypogene and supergene processes…
Primary minerals are those that form by the combination of elements rather than by alteration of a mineral. Primary or hypogene minerals in a hydrothermal system can be extensively altered when exposed to oxygen in the near-surface environment.

Chalcocite (CuS) commonly forms from the alteration of primary copper minerals that are attacked above the water table by oxygen.

The net result of these and related reactions is to oxidize the metals found in the sulfides to form oxides, hydroxides, carbonates, and sulfates. Because these reactions produce oxygen-bearing minerals at the expense of sulfides, the near surface zone (of the Earth, that is) is often referred to as the oxidized zone and the minerals produced are called supergene or secondary minerals.

Next is a simple listing of mineral names with each appropriate chemical formula. Listing these formulas serves to tie a nice neat bow on the whole copper mineralization concept. I hope you agree!

Aurichalcite – (Zn, Cu)(CO(OH), Zinc Copper Carbonate Hydroxide – forms in the oxidation zones of zinc-copper deposits where it is deposited by circulating fluids of carbonate-rich solutions.

Azurite – Cu(CO(OH), Copper Carbonate Hydroxide – considered a minor ore of copper, mostly because it is found associated with other more valuable copper ores.

Copper oxides include:
Cuprite – CuO, Copper Oxide – Of all the copper ores except for native copper, cuprite gives the greatest yield of copper per molecule since there is only one oxygen atom to every two copper atoms.
Cuprite is found in the near-surface oxidized portion of copper-bearing hydrothermal sulfide deposits. It generally is produced by the alteration and oxidation of primary sulfide minerals such as chalcopyrite.

Chrysocolla – (Cu,Al)Si(OH)· nHO, Hydrous Copper Silicate – found in the oxidation zone of copper deposits; associated with azurite, malachite, and cuprite. It is an
important surface indicator pinpointing the
presence of disseminated copper deposits (porphyry copper ore). However, it is not an important copper ore.

Iron oxides include:
Magnetite – Fe+2Fe+3 is very plentiful in skarn.  In the metamorphic environment it is formed by reduction of hematite derived from the dissociation of sulfides and iron silicates.
Hematite – Fe forms under oxidizing conditions.  It remains stable in a low-temperature contact metamorphic environment where it often replaces magnetite.

To Sum Up (yay!) ~~~
There are several possible sources of copper mineralization in skarns:
— It is uncertain whether the copper mineralization in the skarn comes from the quartz monzonite itself or whether in the act of the skarn formation the limestones are altered in such a way as to produce the mineralization.
— Fracturing of the crust enables hypogene or metasomatic mineralizing fluids to bring in copper and other metals from sources deeper in the earth. This could be an undiscovered porphyry deposit or some other unknown source.
— Additionally, the copper atoms may have been transported (from somewhere) by ionic diffusion to ultimately bind with the sulfur atoms.

Cocktail party tidbits:
— The Copper Age of Europe and the Middle East began around 4000 BC., a transition period as Neolithic stone tools gave way to the Bronze Age.
— Artifacts recovered from The Old Copper Complex of the western Great Lakes region have been carbon-dated at 1000-4000 BC. Ninety-nine percent pure copper was discovered in the Lake Superior basin in vein form and in the form of nuggets in glacial outwash gravel beds.
— Native copper (copper found in a chemically uncombined state) was mined for centuries and now is all but depleted as an economically viable ore. Other copper minerals are far more economical to mine and purify into metallic copper that is used for wiring, electrical components, pennies and other coins, tubing and many other applications.

As a geology student several years ago, I had wondered why copper (chemical symbol Cu) shows up where it does.  I had wondered how copper gets to where it gets. I had found that copper could mineralize in rocks in certain areas of what is called skarn.

These queries are turning out to be yet another chapter in my endlessly provocative geological quest:  How did that get there?

With this WATCH FOR ROCKS copper mini-series, I honestly attempt to answer these myriad questions in ways that won’t compel anyone to leave the building.

My previous post addressed two burning questions:
First: What is a skarn?
Second: What does quartz monzonite (a type of igneous intrusion present in my southern Utah study area) have to do with the skarn?

So now we arrive at the Third question — How are skarns related to copper mineralization, anyway?
Most major ores of important metals such as copper, lead and silver are sulfides. Sulfides are most commonly found in hydrothermal sulfide deposits, either in veins or disseminated throughout the deposit. While native copper was a source for the metal early in the development of human civilization, now most copper is extracted from sulfide minerals.

What is an ore?
“It is the naturally occurring material from which a mineral or minerals of economic value can be extracted at a reasonable profit.”

Fourth questions (a two-fer!) — How do sulfides form? How do we get copper from them?

In a nutshell: Transition metals (such as Fe (Iron), Zn
(Zinc), Cu (Copper), Pb (Lead), Co (Cobalt), and others) bond with sulfur by forming molecular orbitals that share electrons to satisfy the valence requirements of the transition metal atoms.

Sulfides and related minerals are characteristic of hydrothermal vein and replacement deposits.
Essential features of hydrothermal systems include:
— Water
— Heat
— A source for the metals and other elements precipitated by the water
— Migration pathways
— Precipitation

As you might suspect, these features (of hydrothermal systems) have features:
1— Water can be evolved from magma, be released during metamorphism (I could really go on about this one…), originate as rain or snow (meteoric), and that all-time favorite, be trapped in sediment pores (connate).
2— Heat is often provided by an igneous intrusion; it also can come from depth.
3—There are several ideas for a source of metals and other minerals precipitated by the water. Metals, sulfur, and other elements in the water may be derived from the crystallizing magma or they may be leached out of a large volume of country rock by the water.
The presence of the metals may also come about through ionic diffusion (ack!) from an unknown source (porphyry deposit?) or by gaseous emanation (but of what, from where?).
4— Fluids commonly flow along migration pathways through rocks along fractures, faults, and normal pore spaces.
5— Minerals may precipitate either by a)filling void spaces or by b)replacing other minerals in the rock through which the fluids flow. As the fluids migrate away from the crystallizing magma, they can encounter chemically reactive rock such as limestone, which may trigger precipitation of metal ions from solution.

Circulating fluids can scavenge elements from the rocks like a liquid Pac-man swimming through a stream. They can dissolve previously produced mineralization and re-precipitate those minerals.

The ultimate result here may be a progressively concentrated volume of valuable minerals.