The deed is done. Our goals are accomplished. That summer of 2005 we drive from southern Utah and hike to the Burgess Shale sites of Walcott Quarry and Mt. Stephen fossil beds, high in the Canadian Rockies of Yoho National Park. We turn for home eventually – but we are not quite ready to drive off into the sunset yet.

I’ve been invited to a cyber New Years Eve party, so I thought I’d better get ready.  Time’s a’wasting!  It will soon be 2012 and I don’t want to turn into a pumpkin!

My house is festively decorated, but I am on a mission… 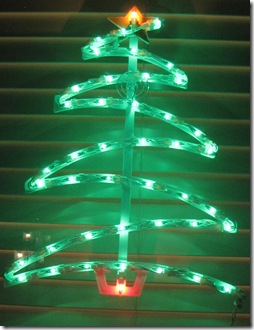 Is this cross–country trip ever going to end?

In November of this year I started a series of posts about a journey I took with friends JC and CO back in 2005. We travel south to north through Utah, across Idaho and Montana, then into British Columbia and the grandeur of the Canadian Rockies. My series is unquestionably taking much longer to write than our jaw–dropping, three–week drive–and–hike adventure took to complete, but we have gotten where we want to be gotten. And there is still more.

Did you think I’d forgotten?

We will soon be returning to the 2005 adventures of “THEALMOST ORGANIZED TOUR OF THE TATTERED REMNANTS OF THE SOUTHERN UTAH EARTH SCIENCE EXPEDITION” as it continues its journey to the fossil beds of the southern Canadian Rockies.

But first – an invitation to a special party! 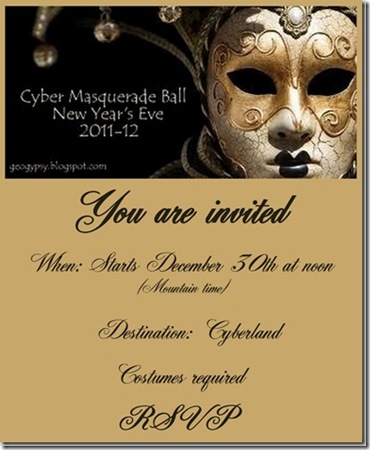 This is the perfect party invitation for all of you out there who, like me, have not stayed up until midnight on New Year’s Eve since Jimmy Carter was president.

In the Red Cliffs Desert Reserve of southwestern Utah wind, water, and time are sublime artists, carving extraordinary sandstone sculptures waiting to reveal themselves to anyone fortunate enough to hike in these hills, canyons, and washes. 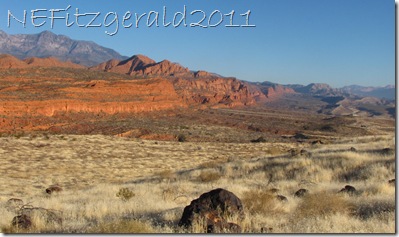 Significant events are competing for the higher recognition on this late December day. On the annual occasion of the least amount of daylight in the northern hemisphere, we are left to wonder which has the more significance – it being the Winter Solstice (at 2230 Mountain Time), or it being National Hamburger Day.

It seems that there are a few more tweaks and fidgets to work out in my switch to my own custom blog domain.  I wonder if this feral burro is running into the same blogging issues that I have?  Looks to me like he has just decided to bag it all and head into the local Oatman, Arizona cafe for a tall cold one. 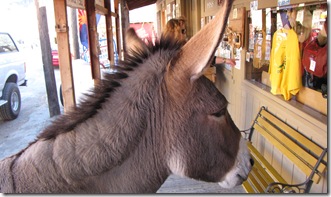 For the past eleven posts (yes, eleven! I counted them!) we have been on a 2005 geological adventure from southwest Utah up through the Canadian Rockies to the Burgess Shale.  We need, however, to pause here for a moment.  I have some really big news!  As Dave Barry might say, Alert readers of this blog may have already noticed the difference.It is eight o’clock on a chilly breezy August morning six and a half years ago. JC, CO, and I are stamping our feet and shivering with a vengeance in the cloud–stippled sunshine outside Yoho Brothers Trading Post near Field, British Columbia. We are bundled into vests and windbreakers and rain hats and thermal underwear, shivering and stamping, it seems, not so much from the cold but from anticipation.
The proprietor of Mt. Burgess Guest House in Yoho National Park, Canada thinks we are nuts to go hiking at Lake Louise this early August morning. The crowds! The tour buses! The white socks and sandals! We really do not care in the least, though. It makes no difference to JC, CO, or me. We have finally arrived at the Center of the Rocky Mountain Universe and know that if we get up early enough we can evade the white sock–wearing contingent. Plus, it is a well–known fact that ten minutes away from any parking lot or trailhead the sheer size of the crowd is certain to diminish exponentially. Those folks have half an hour. We have all day.
If I knew then what I know now, the geology of the Canadian Rockies would have made a whole lot more sense back in August 2005. Earlier that year I began organizing what would prove to be a most remarkable sixteen day trip from southern Utah. At the time of this epic adventure I had just finished my first year studying geology in Utah. Fourteen people originally signed up but only three of us actually went, a circumstance which turned out to be the best of all worlds.
We’re definitely making progress.
In the previous post about our four day epic drive from southern Utah to Canada’s Yoho National Park and its 515–million year old Burgess Shale fossils our lively two–car caravan finally crosses the international border at the Roosville Port of Entry. We are still on Highway 93, only now we are in another country. And even though for the past three days we have found ourselves motoring along in some of the most spectacular scenery this side of the Arctic, on our fourth day we get to cruise through the even more impressive valley of the Rocky Mountain Trench.