Tower Power And An Archean Gneiss

Yellowstone is a massive piece of real estate. With around 2.2 million acres, you could spend a lifetime here and not see it all. With that thought in mind I am doing my part to experience as much of it as I possibly can while I’m here.

Last week I decided to burn some fossil fuel and take a drive to the Tower–Roosevelt area to have a look around outside of the caldera. I don’t get up to Tower as much as I’d like, because from Grant Village it’s nearly 60 miles and there are a lot of hiking trails and attractions between there and here that manage to capture my attention. So early one morning on my day off I meandered north along the curving west side of Yellowstone Lake, cruised through the wide–open hills of Hayden Valley and its herds of slobbering bison lollygagging in the middle of the road, and contoured my way up, across, and down Dunraven Pass, at 8859 ft (2700 m for my metric friends) the highest point on a road in the park.
My first stop was Tower Falls. 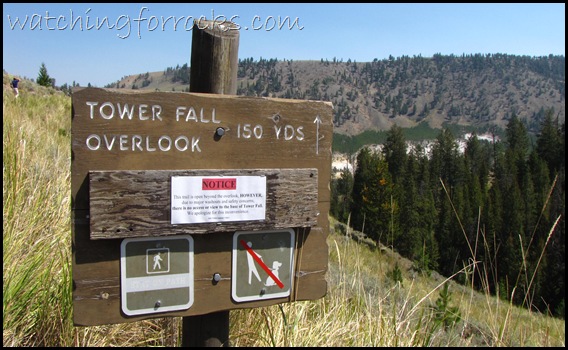 It helps to arrive early at Tower. The parking area is small and has a weirdly triangular shape with parking spaces arranged in seemingly random directions – I avoid parking too close to the canyon edge for fear my aging clutch might pop itself out of gear and tumble down into the abyss. I chatted for a moment with two young “Save the Bison” proponents at a table cluttered with out–of–date handouts and posters with too many misspelled words. I soon extricated myself from that scene and moseyed on over to the overlook.

Where did all these rocks come from?
Consider, if you will, the Cascade Mountain Range of present–day Washington, Oregon, and northern California. Around 50 million years ago during the Eocene epoch, similar volcanism related to subduction was occurring in the northern Rocky Mountains.
Eruptions during Eocene times were similar to the more recent eruptions of Mount St. Helens in 1980. These explosive volcanoes millions of years ago also included thick deposits of lava flows, mud flows, and debris–flow conglomerates, along with deposits of air–fall and stream–deposited ash.
If a mountain peak is high enough it will likely be covered in snow or glacial ice. When this ice melts during a volcanic eruption, the whole slurry of melted ice, mud, rocks, and debris hurtles its torrential, unstoppable mass down the slopes in what is called a lahar.
Fifty million years ago from Wyoming to Oregon there were many chains of these volcanic peaks. Nearby Mt. Washburn exhibits the remnant internal plumbing of one of the Absaroka volcanoes that produced some of this debris. The Absaroka Range of eastern Yellowstone is largely a pile of debris–flow conglomerate deposited by streams and lahars with gravels consisting mostly of pieces of volcanic rock.
Tower Falls flows across an erosion–resistant layer and plummets 132 feet down a vertical cliff of this Eocene–age volcanic conglomerate. 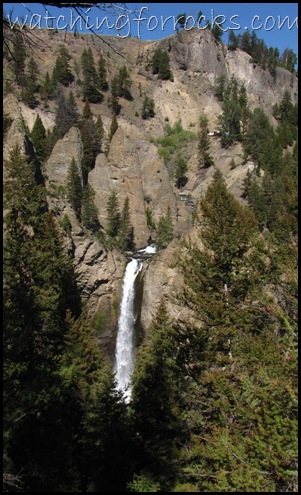 The trail to the base of the falls was closed but there was another open, easy access down to a stretch of the Yellowstone River. I picked my way upstream a short way, examining gravels and admiring the thermally altered cliffs on the other side of the river.

Picking up the pieces

After lunch at Roosevelt Lodge (thinly sliced beef on a toasted roll, apple slaw, and a beer) I investigated two trailheads to Specimen Ridge along the road from Tower to Cooke City – one a bit longer but easier, one shorter but reputedly much more tortuous. There are upright fossil trees on this ridge, found in the sandstones and conglomerates that were deposited on flanks of those volcanic mountain chains 50 million years ago. The forests were buried by the lahars and sediment–choked streams. Cool–climate trees such as fir, spruce, alder, willow, and elm were all buried with trees associated with warmer, subtropical climates such as magnolia, avocado, and laurel. Also found are fossil hardwoods such as walnut, dogwood, sycamore, maple, and oak. I’ve got to get up there!
However, my main reason for this trip was to get back to Lamar Canyon, home of 2.7 billion year old Archean gneisses of the Beartooth Block. I just wanted to give these rocks a big hug before I started banging on them.

There are few rocks on this planet more interesting to me than ancient metamorphic rocks, and in Lamar Canyon anyone can get up close and personal with some fascinating roadcuts. As a seasonal interpretive ranger I have a collecting permit for Grant Village, and this summer I have been assembling a small array of various rock types for display at the visitor center. On my hikes I’ve found obsidian, tuff, and geyserite inside the 640,000 year old Yellowstone caldera. I’ve found travertine in buttes and 320,000 year old basalt in cliffs outside of the caldera, along with 50 million year old petrified wood in stream gravels and 300–million year old limestone outcrops.
And now I’ve finally found a piece of real history – 2.7 billion year old Archean metamorphic rock, outside the caldera in space but most especially in time.
You just never know what you’ll experience when you get out there.