Here are several facts you might be interested in knowing about Yellowstone Lake:
It has the largest surface area of any lake in North America above 7000 feet.
It has 141 miles of shoreline.
It has leeches living in it.

There are also scenic boat cruises out of Bridge Bay marina offered daily during the summer. Since weather on the Yellowstone Plateau is most often unpredictable and the lake can go from flat to ferocious in a matter of minutes, an early morning outing is by far the better choice for those inclined to seasickness (that would include me). 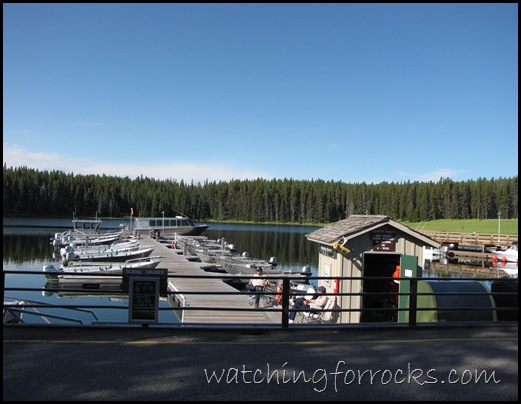 Bridge Bay marina on Yellowstone Lake in the early morning 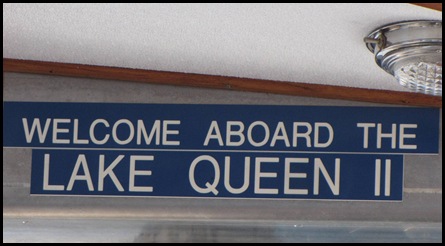 I had a plan. I would enjoy an hour–long morning cruise on the lake, toodle around afterwards on a nature trail alongside the lake, and partake of a leisurely afternoon lunch in the hotel beside the lake. It would be a Lake Day all around, made more intriguing by being able to view what is left of the wreck of the E.C. Waters.

“…everyone here and west who knows Waters represents him totally unreliable.”

In the summer of 1889 interest in a steamboat service on Yellowstone Lake was building, and a certain insufferable character by the name of E.C. Waters was allowed to put in a boat on the lake under a franchise with the Yellowstone Park Association. Waters hauled in to the Park the steel hull for a 40–ton steamboat that he named the Zillah, which had originally been launched on the Great Lakes in 1884. It was transported in segments by train and wagon and reassembled at Yellowstone Lake.

Park visitors of the time were most likely to be transported around the Park in horse drawn stagecoaches – hot, dusty, bone–jarring, teeth–rattling tours of at least a week. The Zillah would enable visitors to decrease their dusty journey by at least 19 miles and allow them to travel more comfortably (for an extra fee, of course) across Yellowstone Lake from West Thumb geyser basin to the Lake Hotel. For a while, entrepreneur Waters paid the coach drivers fifty cents for each passenger that abandoned the coaches and embarked on the Zillah, continuing their journey with a cooler cruise across the Lake.

That arrangement didn’t last long. Waters one day decided that he could no longer afford to pay the coach drivers their 50 cent per passenger kickback. And so the coach drivers waged a not so quiet little war by boycotting him.

In 1905 Waters launched a second, larger vessel and modestly named it after himself. The E.C. Waters had a length of 125 feet and was considered adequate for transporting 500 people. But it was never licensed for that number as a commercial ferry. Waters refused to settle for less and so it became an idle investment that soon lay abandoned at its anchorage on the east side of Stevenson Island. By the early 1920s its engines and boilers had been removed and used to heat the Lake Hotel. The boat became a useless derelict. In 1930 a group of rangers skied over to Stevenson Island and poured a can of kerosene on the bow of the boat. What was left of the E.C. Waters was set on fire.

E.C Waters Yellowstone Boat Company had been in financial difficulty after the turn of the twentieth century because of his volatile temperament and ongoing unscrupulous activities (among which was soaping Beehive geyser back in 1888 to impress some visitors, after which he was promptly arrested). He had alienated other concessionaires, government authorities, employees in the Park, and even visitors, and had made an unwise investment in the E.C. Waters. His boat concession was cancelled in 1907 for a multitude of reasons, not the least of which was his apparent propensity for being totally obnoxious to everyone.

By the time I disembarked the Lake Queen II and drove over to the Pelican Creek nature trail, clouds had started to build, the wind had picked up, and the lake had become, if not ferocious, then at least frisky.

I walked through the trees and out to the end of a sand bar, watching in wonder as the wind relentlessly shoved the lake waters up the inlet at Pelican Creek. With some success I managed to avoid the dense droppings of gull poo while keeping an eye out for any larger four–legged critters that might decide to walk out on the sand bar behind me. I stood and pondered where the equilibrium point of the two bodies of water might be, just where exactly the power of the incoming lake was equal to the outgoing power of the much smaller creek draining into it.

Eventually all this watchful pondering made me hungry. I turned slowly back into the trees, reluctant to leave the drama of this windswept point. However, there was a leisurely afternoon lunch at the lakeside Lake Hotel destined to take up the next few hours of my day. I couldn’t keep that waiting.