To many people the phrase “interstate highway” conjures up all sorts of negative images and descriptions, mostly having to do with getting from Point A to Point B in as little time as possible. To these folks I have only one thing to say. You might want to consider spending some time along interstate 15 through the Virgin River Gorge.

It took 17 years to construct this section of highway through the Beaver Dam and Virgin Mountains in the extreme northwestern corner of Arizona. The route follows the winding course of the Virgin River gouging its own path across these mountains from its headwaters on the high plateaus above Zion National Park in Utah to its ultimate rendezvous with the Colorado River.

The layers of rock here hold a bouquet of geologic wonder, wherever you look. Driving through the sedimentary rocks of the Gorge is like driving through a mini Grand Canyon.

I stopped at the Virgin River Canyon Recreation Area the other day after an Arctic storm left a blanket of snow draped across the massive cliffs. Not surprisingly the picnic area and campground were empty of any other visitors and so I wandered around alone in the frigid sunshine, pondering the rocks and taking photos while hoping my camera batteries didn’t freeze.

The tops of the cliffs are composed mainly of the Fossil Mountain Member of the Permian Kaibab Formation. This fossil–rich cherty limestone gives evidence of ancient shallow seas and is the surface rock of much of the area between southwestern Utah and the Grand Canyon. If you are looking for 260 million year old sponges, bryozoans, brachiopods, corals, and gastropods, this is the rock in which to find them.

If there hadn’t been so much snow on the ground I might have been able to pick out the white laminated gypsum layers of the Woods Ranch Member of the Toroweap Formation beneath those younger Kaibab sediments. There is quite a large gypsum mine just south of St George, Utah. I have always thought the mine was in the younger Moenkopi Formation but upon a bit of pondering it appears to be part of the Toroweap. I guess you learn something every day.

There are a multitude of things in life that have puzzled me over the years, the fact that people actually like the taste of liver being one. But in the Gorge, I have often wondered where the Coconino Sandstone could be found. In the Grand Canyon the Coconino is a substantial cliff former, clearly noticeable beneath the Kaibab limestones.

And then I got to pondering again. 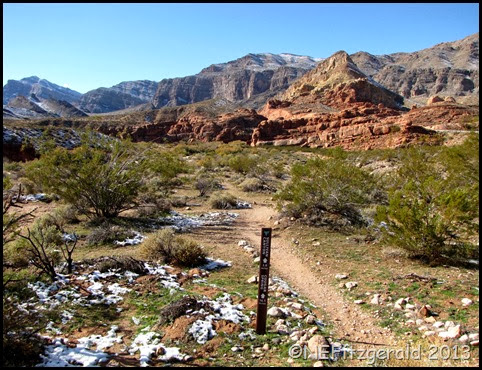 I discovered that the Coconino Sandstone of the Grand Canyon is called the Queantoweap Sandstone in the Virgin River Gorge. Why the name difference for rocks of the same age from nearly the same vicinity? The Grand Canyon isn’t that far away. In this case, though, physical characteristics such as color, mineral composition, and grain size of this age sandstone in the Gorge were found to be dissimilar enough from those in Grand Canyon to warrant their own separate identification.

Several intriguing trails lead from the recreation area. One appears to be a short jaunt down to the river. Another longer trail heads out for two miles to Sullivan Canyon which in turn continues for 14 miles further up to Cougar Spring and on to Mount Bangs (Around 22 years ago I hiked Sullivan Canyon from the top down and swore I would never do that canyon again). The Sullivan Canyon fault and the Cedar Pockets fault converge just west of the recreation area (which used to be called Cedar Pockets rest area). Perhaps this faulting is the reason that blocks of younger Queantoweap Sandstone seem to be found beneath the massive cliffs of even older Mississippian Redwall Limestone?

After all, older sediments will always be beneath younger sediments unless something has happened to change their orientation.

I do need to get back out there and hike those trails. If I don’t, it will be no one’s fault but my own. 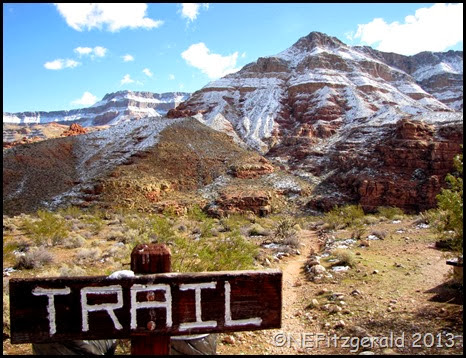