Before leaving Yellowstone last September, I walked around West Thumb geyser basin to snap some photos of the thermal features. At the time, these three adjacent thermal pools along the middle boardwalk had been full to the rim, crystal clear, and steaming. It looked like they could remain that way forever. I wanted to see whether any thermal features might change over the winter, though, and what surprises might await my return in the spring. 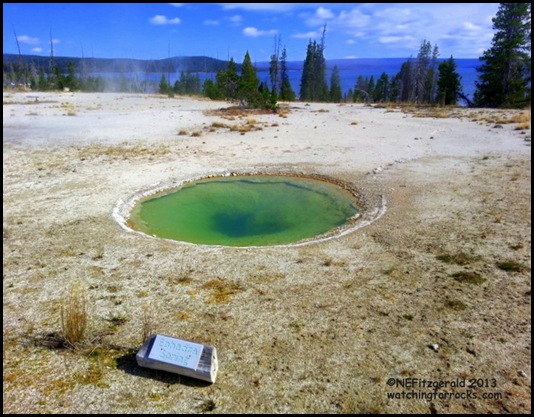 WOW! Last week when I strolled around West Thumb for the first time in eight months, I nearly fell off the boardwalk. Upon my return, these thermal features were anything but full to the rim, crystal clear, and steaming. One of the rangers who had staffed the West Thumb warming hut this winter said that the three pools drained completely in February, filled again briefly (but not to the rim), then drained again.

There actually is a name for this sort of activity. It is called “an exchange of function” and it occurred as recently as 1992, shifting energy away from these three pools towards Abyss and Black pools, nearly 400 feet away. During this time, the water in Blue Funnel Spring, Ephedra Spring, and Perforated Pool cooled significantly and dropped to low levels.

Over a period of around six months, the now–quiescent Abyss Pool erupted geyser streams of hot water and steam, upwards of 50–70 feet into the air at intervals of 45 minutes to 5 hours and durations of 1 to 3 minutes. In 1991, a small spring at the rim of nearby quiet Black Pool heated up and eventually exploded, blasting 30–pound blocks of geyserite into the air. In early 1992, when Abyss was active, Black Pool also experienced small, brief eruptions. However, by the summer of 1992 all was quiet within Abyss and Black pools. Blue Funnel Spring, Ephedra Spring, and Perforated Pool also returned to their previous full water levels.

Change is constant here in Yellowstone. The magma chamber is only a few miles beneath the surface here, and heat generated in any one place can vary over time as the magma itself shifts. It is thought that deep fractures exist along the alignment of the center boardwalk, and that this fracture system somehow affects the movement of heated water between some thermal features. It is a common occurrence in Yellowstone for one pool to drain when another geyser is in an eruptive phase.

So every Grant Village ranger is thinking, Is something similar happening now?Will I be lucky enough to witness any sort of eruption of Abyss Pool and/or Black Pool this summer? Will I be bonked on the head by a piece of flying geyserite during my Hot Water Wilderness program?

Ladies and Gentlemen, place your bets!