Walking the Hard Road to Travel

Just up the road a piece from Grant Village, along the shores of the West Thumb of Yellowstone Lake, there lies a gravel bar that is perhaps a mile or so long. When folks these days learn that its name is the “Hard Road to Travel,” they often wonder if it had been constructed as a road. They inquire, Who would build a road out there in the lake? Why would anyone do that?

It was used as a wagon road back in the late 1800s and early 1900s, and probably also by the first automobiles to venture into the Park (and maybe even ridden by a plucky bicyclist or two!). However, this gravel bar occurs naturally, as the winds push waves across the lake and the breaking waves shove the pea–sized gravel along the bottom of the curved shoreline.The ice on Yellowstone Lake has pretty much broken up and melted by now, and The Hard Road to Travel sits pretty well above lake level. But if the snowmelt from the surrounding mountains is substantial in the coming weeks, the gravel bar may become almost completely submerged. 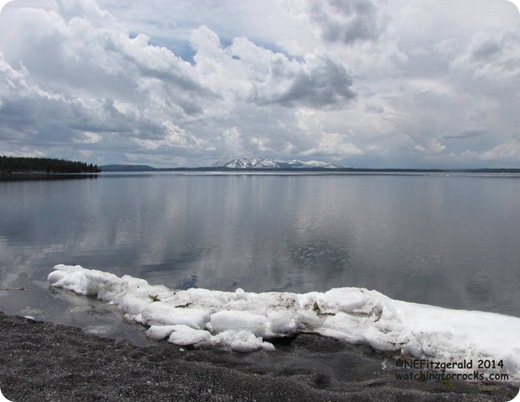 Ice lingers along the edges of Yellowstone Lake. Snow-capped Red Mountains are in distance.
Ranger Nancy is new to Yellowstone so the other day I offered to orient her to some local West Thumb points of interest. I had driven 200 miles to Cody and back the previous day and simply did not want to go that far again. Only about ten miles away, The Hard Road to Travel was the perfect option.

A lagoon between the gravel bar and the Park road is an excellent place to watch, not only for rocks, but also for water birds. On this overcast day we observed lesser scaup, bufflehead, and a (possible) blue–winged teal all paddling about, Canada geese in flight, swallows (tree?) swooping mere inches above the lake surface, and an unidentified hawk perched in a distant tree.

My blurry bird photos are mostly due to not having a great telephoto lens (or is it the shaky nut behind the camera?). Since I rarely remember to drag along a tripod, my avian photos are less than optimal and will never win a Nat Geo photo contest.

The gravel bar consists mainly of pea–sized pebbles of tuff (consolidated or cemented volcanic ash) and obsidian (volcanic glass), including mahogany obsidian with its burnished brown color that is due to the presence of iron. Obsidian is commonly found within the margins of rhyolitic lava flows known as obsidian flows. This particular flow (which, if I am looking at the geologic map correctly, is called the West Thumb flow) is one member of the Central Plateau Rhyolites that continued to flow into the collapsed crater for hundreds of thousands of years after the major caldera eruption of 640,000 years ago.

During the summer, folks come out here to fish, swim, picnic, catch some sun, take a stroll, or just relax. It is one of the few places on the lake with a good beach for swimming but you most likely will have to endure swarms of mosquitoes (and beware of the leeches in the lake!).