Before the lamb of March turns into the showers of April, there are unanswered questions from my previous post that must be addressed.
1)Will we make it out alive before the amphitheater erodes completely?
2) When exactly does the sun go down over the yardarm?
3) Will we ever put on those skis? 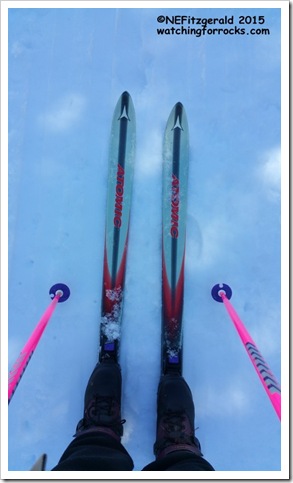 Spring has sprung at last, but it seems as though it has been here for months already. Usually, snow can linger well into summer, up on the high plateaus of southern Utah. Several weeks ago, two friends and I hoped it would last at least through the middle of March. We wanted to ski, and we wanted to ski at Bryce Canyon. To ski you need snow, and there has been a noticeable lack of it this winter. Temperatures have been higher than average here in Utah, with conditions great for hiking but abysmal for skiing (click here for that story). The generally thick blanket of snow we know so well had morphed into slightly more than a veneer. We could only hope for the best as John, Cathy, and I stuff our skis, suitcases, and snack items into the back of my car and drive off in wild anticipation of the miles of cross–country ski trails that Ruby’s Inn grooms just outside the Park. We would spend two nights at the Inn and get in as much skiing as our little hearts desired.