It staggers anyone’s sense of time and space. I am compelled to read about it over and over and over again after I get home from my May 2015 raft trip down the Colorado River. It takes quite a bit of “Wait. What?” before I can even begin to wrap my mind around its significance. It is the Grand Canyon Supergroup, gently tilted and isolated remnant wedges of the oldest limestones, sandstones, siltstones, mudstones, and basalts found in Grand Canyon. We are talking about sedimentary rocks that are more than a billion years old.

One story ends as another begins. Around 1,300 million years ago in northwestern Arizona, lofty mountains reaching high into the sky entered the next phase of the relentless geologic cycle of deposition, uplift, and erosion. Over the next 45 million years, these igneous and metamorphic rocks (now called the Granite Gorge Metamorphic Suite, but you may know them as the Vishnu Schist and Zoroaster Granite) would be weathered, eroded and planed flat to near sea level. As the western continent subsided, new sediments were deposited on top of this planed surface. Radiometric dating and studies of paleomagnetic pole positions suggest that this new deposition started about 1,255 million years ago and lasted for 250 million years. These are the sediments of the lower, older Unkar Group of the Grand Canyon Supergroup.

The Supergroup consists of nine different formations divided into two subgroups. From oldest to youngest, these are the Unkar Group (five formations) the Nankoweap Formation, the Chuar Group (two formations), and the Sixtymile Formation. Just downstream from the confluence of the Colorado and Little Colorado, the Unkar is impressively exposed at river level in eastern Grand Canyon. Tonight, we sleep within its layers.

Collision in the East, Rifting in the West

Meanwhile, continents were colliding and assembling into the supercontinent Rodinia. Along a belt of landscape between Texas and New York, the Grenville orogeny was the collisional suture zone between an ancient North American eastern coastline and other unknown land masses, either continental or island arc. Along this band of colliding landscapes, mountains were thrust upward and the crust was compressed. The relentless tectonic activity that ensued over the next 200 million years was powerful enough to affect the continent as far away as the Grand Canyon region.

While crustal contraction and mountain building persisted in the east, much of the rest of the continental interior was trying to rift apart. Deposited primarily in a shallow water basin at or near sea level, the Unkar Group in Grand Canyon may record a history of the contraction and extension caused by these crustal stresses of the Grenville orogeny far away in Texas.

The Grenville orogeny was the culmination of the formation of Rodinia. The supercontinent began to split apart about 750 million years ago as Australia and Antarctica pulled away, or rifted, from the western edge of North America. Extensional or normal faulting occurs during rifting or stretching of the crust, and this is what happened in the Grand Canyon region. As Australia and Antarctica (and possibly China) went bye–bye and sailed off into the western horizon, the crust of western North America stretched. Normal faults split the Grand Canyon region and offset adjacent blocks of crust nearly two vertical miles. It was the movement along these normal faults that tilted the blocks of rocks of the Grand Canyon Supergroup. Mountain blocks were tilted upward like so many toppled dominoes and separated by downdropped basins. This configuration of tilted rocks is common in areas of crustal extension and occurs today in the Basin and Range Province of Nevada.

The Butte Fault system is a prominent structure in eastern Grand Canyon. Studies show that the Butte Fault is a normal fault that underwent more than 10,000 feet of west–side down displacement at the end of the Proterozoic, during the break up of Rodinia. The isolated, remnant wedges of Grand Canyon Supergroup rocks are preserved due to their existence as tilted, fault–bound blocks. The Butte Fault system undoubtedly played an important role in the tilting and preservation of these Supergroup rocks.

By 545 million years ago tectonism had quieted. With the exception of scattered hills of Shinumo Quartzite and Zoroaster Granite, the Basin and Range–like mountains had been weathered and eroded to a beveled flatness.
I spot a snazzy step fold in the Dox Formation. These interbedded sandstones and mudstones tell a story of changes in an ancient sea level around 1,100 million years ago.

According to my map, this prominent peak is Comanche Point. 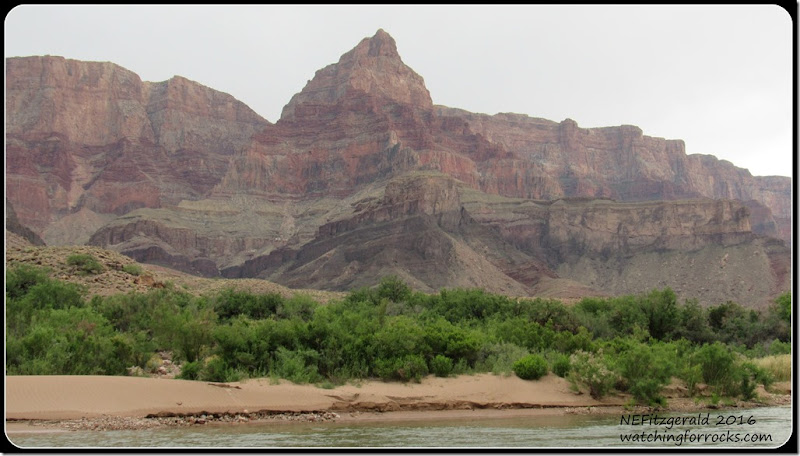 We slowly motor through the Dox… 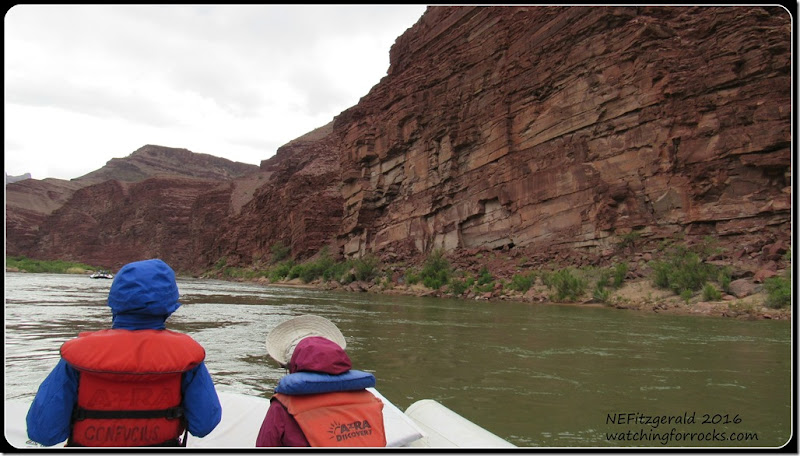 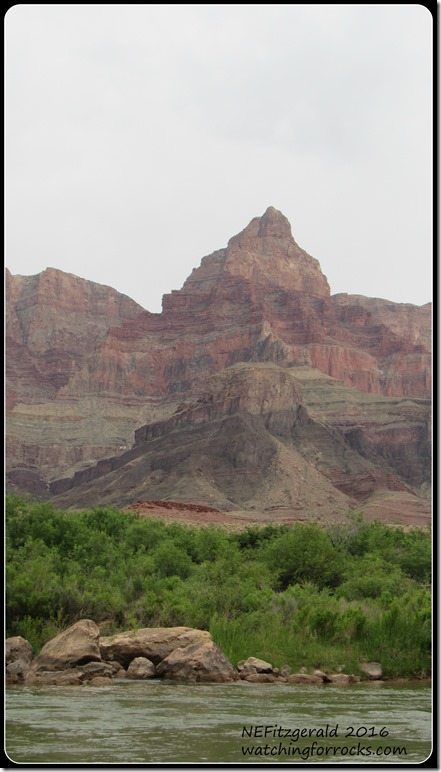 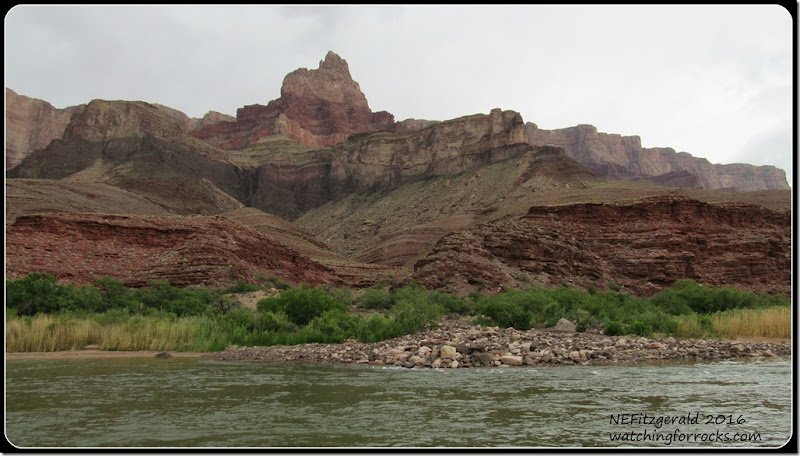 All ashore that’s going ashore! Our campsite is nestled within the East Kaibab monocline, a continuation of the Butte Fault that extends northward across the Utah border.

From my journal:
By the time we reach camp #3 (just upstream from Tanner Rapids, about river mile 68.5), we had gone by the Sacred Hopi Salt Mines, past the Great Unconformity, and traveled into the Dox Formation of Precambrian age. The wind is fierce but the rain has stopped and the sky is clearing. I am exhausted from the wind and rain and so take a long time setting up my tent. Kris’s tent nearly blows away so I give her a couple of extra stakes. She also guys it down with some rocks.
Dinner is Mexican and hot tea. Others stay up around a warm campfire but Kris and I retire to our tents at dark. The wind is diminished. I can hear the constant roar of nearby Tanner Rapids — tonight’s lullaby.
Tomorrow promises to be a non–stop, wild rapids ride, one after another and BIG! Apparently, we haven’t seen anything yet.