Living the Dream, Day 6 – Elves Chasm and the Great Unconformity

A rosy–fingered dawn metamorphoses into a vibrantly blue morning sky. In the blink of an eye, shadows and colors shift on the canyon walls. Another plate of scrambled eggs sits balanced on my lap. It is Day Six of our Colorado River rafting adventure in Grand Canyon. A question hangs suspended in midair. Where exactly in this magnificent chasm are we now?

We camped last night at river mile 109, just downstream of Bass Rapid and Hotauta Canyon. A block of tilted Grand Canyon Supergroup rocks exposes itself downstream for a few short miles along this stretch of river and then disappears.

Once upon a time, North America looked much different than it does today. For one thing, the continental landmass was smaller. Studies of the chemical composition of Grand Canyon rocks have led geologists to conclude that in this region the continent grew by collision and accretion of island arcs and other continental fragments during subduction of one ancient tectonic plate beneath another. A modern parallel to this tectonic growth is likely Indonesia, where the Australian plate is sliding northward, subducting beneath the Pacific plate and forming the volcanic island arcs of the Indonesian archipelago.

Early 20th century studies in Grand Canyon identified different “packages” of deformed metasedimentary and intrusive igneous rocks that resulted from this tectonic activity. At 1.84 billion years old, the igneous intrusive Elves Chasm pluton is considered to be “basement,” the oldest rocks upon which subsequent sedimentary and igneous rocks were deposited or intruded.

In the Upper Granite Gorge, between river miles 113 and 120 (from Waltenberg Canyon to Blacktail Canyon, where we will have lunch and a serenade), the contact between the Elves Chasm pluton (1.84 billion years old) and a younger (1.75–1.73 billion years old) Grand Canyon Metamorphic Suite of schists is exposed.

Where exactly is this contact? I have no idea. Our guides are not geologists and so there is no one to point these things out to me. My research is done after the fact, long after I’ve returned home from this trip of a lifetime. I study my photos, and read my references, and try to weave a thread of sense from all I have seen. I need another river trip in a bad way!

In the meantime, I nearly fall out of the boat when we encounter the SE–NW trending Monument Fold. The folded sedimentary layers look to be the Cambrian Tapeats Sandstone, quite a bit younger than the metamorphic Elves Chasm pluton and suite of schists beneath.
I am pretty sure this perky little structure is not the Monument Fold. 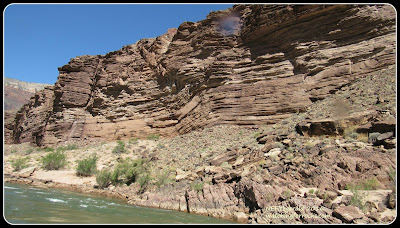 On the other hand, I am fairly certain this behemoth is.

The fold runs behind Explorer’s Monument and presents itself again downstream, just beyond river mile 118. I consider that it is likely the surface manifestation of a reactivated Precambrian thrust fault buried deep in the ground. There seems to be a lot of that sort of thing going on in these parts. When the folding occurred, I have no idea.

There is missing time here, between the metamorphic rocks and overlying Tapeats Sandstone. Over a billion years is unaccounted for in the geologic record. This is the Great Unconformity at river level.

Around river mile 117 we disembark at Royal Arch Creek for a short jaunt. The Elves Chasm waterfall is a major reward for minimal exertion. Somewhere around here is the contact between the Elves Chasm pluton (gneiss) and the Grand Canyon Metamorphic Suite. I wish I could recognize it or have someone to point it out to me. I could be right on top of it and not know it.

Soon it is time to jaunt back to the boats. A lunchtime serenade beneath the Great Unconformity awaits us downstream at Blacktail Canyon.