First Day On The Peninsula–Earthquake Trail

First Day On The Peninsula–Earthquake Trail
I had driven nearly eight hundred miles to stand at this place and am not going to let a little rain stop me. Here I am at last, gazing upon a quiet stretch of late-winter woods where last year’s fractured fallen leaves compost themselves down a set of shaded steps. A graying weathered section of picket fence follows alongside these steps for a bit, stops, and then picks itself up again about 20 feet off to the right as it disappears into the thick green undergrowth. 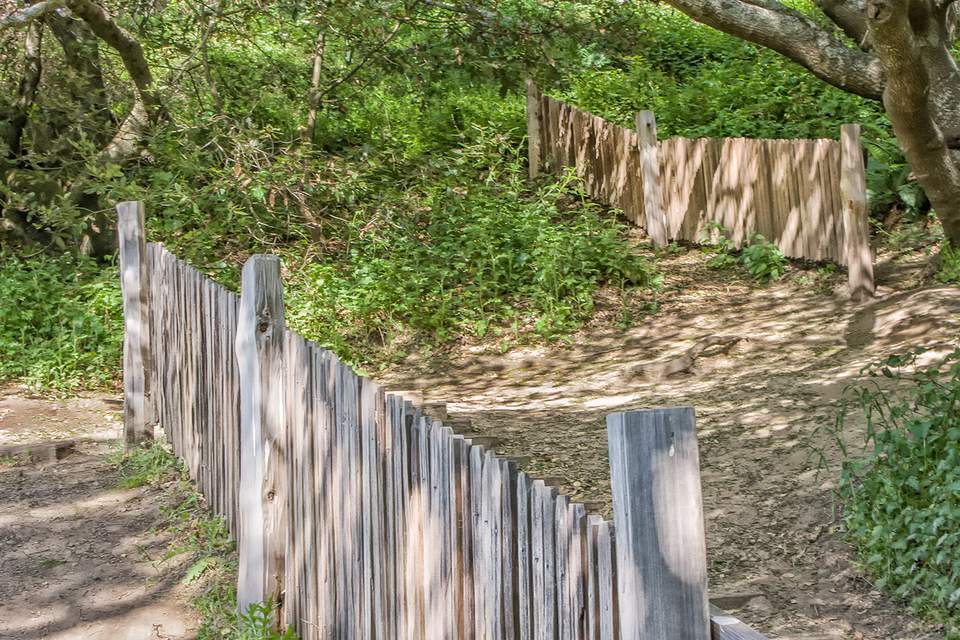 It all looks quite serene, doesn’t it?

In light of what is known about this area, however, appearances can surely be deceiving. I am standing on the trace of the San Andreas Fault as it weaves its way through Point Reyes National Seashore just north of San Francisco, CA. During the 1906 San Francisco earthquake, Point Reyes on the Pacific plate (to the left of the SAF) jumped 20 feet to the northwest, grinding past the adjacent North American plate (to the right of the SAF).

The .6-mile long paved interpretive trail starts near the Bear Valley Visitor Center and winds lazily through the trees.

By now I’m dancing in my shoes, thinking “OK – I’m here! Where is the fault?” I want it to jump out at me. Well, perhaps “jump” is not quite the best word to describe what I want the fault to do at that particular moment, but I am hoping to SEE IT and perhaps even touch it. Is that asking too much?

Apparently, though, the fault zone is about a mile wide here, and so I’m not so much looking AT the fault as I am walking around IN the fault zone. What we see on the ground is an expression of what happened as built-up stresses between two tectonic plates finally were relieved, one hundred and five years ago.

Upright blue posts, in straight-as-an-arrow configuration, display the trace of the fault.

It is a bit disconcerting, however, to turn around to follow the blue posts in the other direction…

YIKES!!! Does anyone know these buildings are here?

The path continues serenely along the trace of the fault and then back to the Visitor Center. Such serenity can make us complacent, so much so that we continue constructing bridges and benches and houses and lives and along the San Andreas Fault…

… hoping beyond reasonable hope that our nest doesn’t fall out of its tree.